It is very normal for all children to have specific fears at some point in their childhood. Even the bravest of hearts beat right up against their edges sometimes.

As your child learns more about the world, some things will become more confusing and frightening. This is nothing at all to worry about and these fears will usually disappear on their own as your child grows and expands his or her experience.

In the meantime, as the parent who is often called on to ease the worried mind of your small person, it can be helpful to know that most children at certain ages will become scared of particular things.

When Is Fear Or Anxiety A Problem?

Fear is a very normal part of growing up. It is a sign that your child is starting to understand the world and the way it works, and that they are trying to make sense of what it means for them.

With time and experience, they will come to figure out for themselves that the things that seem scary aren’t so scary after all. Over time, they will also realize that they have an incredible capacity to cope.

Fears can certainly cause a lot of distress, not only for the kids who have the fears but also for the people who care about them. It’s important to remember that fears at certain ages are completely appropriate and in no way, are a sign of abnormality.

The truth is, there is no such thing as an abnormal fear, but some kids will have fears that are more intense and intrusive. Even fears that seem quite odd at first, will make sense in some way.

So How Do We Get Rid Of The Fear?

If you have a child with anxiety, they may be developing certain fears. Again, this is nothing at all to worry about. Kids with anxiety will mostly likely always be sensitive kids with beautiful deep minds and big open hearts.

They will think and feel deeply, which is a wonderful thing to have. We don’t want to change that. What we want to do is stop their deep-thinking minds and their open hearts from holding them back.

The idea then isn’t to get rid of all fears completely, but to make them manageable. As the adult in their lives, you are in a perfect position to help them to gently interact with whatever they are scared of. Eventually, this familiarity will take the steam out of the fear.

First of all, though it can be helpful for you and your child to know that other children just like them are going through exactly the same experience.

Fears in infants and toddlers (0-2)

• Loud noises and anything that might overload their senses (storms, the vacuum cleaner, blender, hair dryer, balloons bursting, sirens, the bath draining, abrupt movement, being put down too quickly).

• Being separated from you.

Here’s why: At around 8-10 months, babies become aware that when things disappear. Before this, it tends to be ‘out of sight, out of mind’. From around 8 months, they will start to realize that when you leave the room you are somewhere, just not somewhere they can see you. During their second year, they begin to understand how much they rely on your love and protection.

Here’s why: An awareness of strangers will peak at around 6-8 months. They will start to recognize the difference between familiar and unfamiliar faces. By this age, babies will have formed a close connection with the ones who take care of them.

(At this age, separation anxiety and stranger anxiety can be a tough duo for any parent. Your little person doesn’t like being away from you, but they might not be too fond of the person you leave them in the care of. It can be tough, but hang in there – it will end.)

• Lightning, loud noises (the bath draining, thunder, balloons bursting, fireworks, loud barking dogs, trains) and anything else that doesn’t make sense.
Here’s why: They will become very aware of their lack of control in the world. Because of this, they might show a fear of things that seem perfectly innocent to the rest of. It can be a scary world when you’re new to the job of finding your way in it!
• Scary noises, Halloween costumes, ghosts – and anything else that feeds their hardworking imaginations.

Here’s why: Their imaginative play is flourishing and their imaginations are wonderfully rich. At this age, they will have trouble telling the difference between fantasy and reality.

• The things they see on television or read in books might fuel their already vivid imaginations and come out as scary dreams. This might bring on a fear of the dark or being alone at night.

Here’s why: At this age, kids can struggle a little to separate fantasy from reality. If they hear a story about a pirate for example, as soon as the lights are out they might imagine what the heard. A calming bedtime routine and happy, pirate-free stories can help to bring on happy sleep.

Here’s why: At this age, grown-ups in dress-ups are no more adorable than they were in the baby days. If Santa doesn’t know what they want, he might just have to work harder, because there’s no way they’ll be telling him in person. Lucky he’s magic and has people on the ground who know the important stuff. 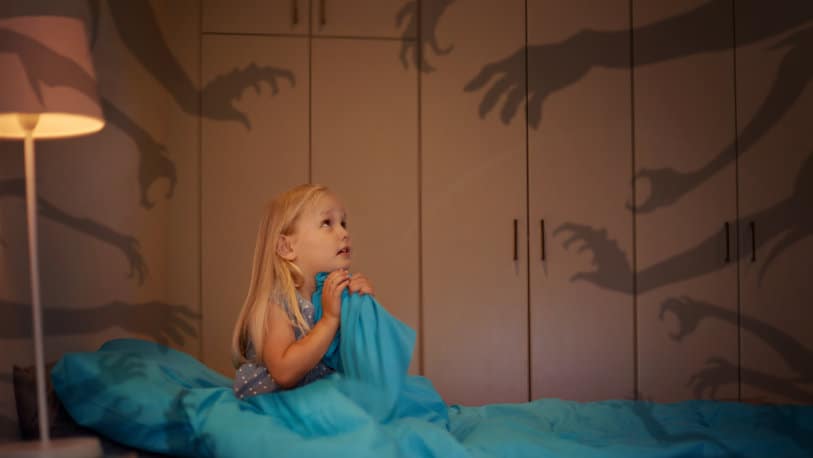 • Being separated from you.

Here’s why: At this age, children might show a strong reaction to being separated from one or either or their parents.

This comes as they start to see outside of themselves and realize that bad things can happen to the people they love. They might want to avoid school or sleepovers so they can be with you and know that you’re safe and sound.

• Ghosts, monsters and witches – and anything else that bumps around in their wonderfully vivid imaginations. This can also show itself as a fear of the dark – because we all know the spooky things love it there.

Here’s why: Their imaginations are still hard at work so anything they can bring to life in there will be fuel for fear.

• The dark, noises, being on their own at night, getting lost, getting sick.

Here’s why: As well as fearing things that take up precious real estate in their heads, they might also become scared of things could actually happen. These are the sorts of things that might unsettle all of us from time to time.

Here’s why: Because of the blurred line between fantasy and reality, bad dreams can feel very real and are likely to peak at this age. • Monsters, witches, ghosts, shadows on the wall at night.

Here’s why: Though their thinking is more concrete, children at this age will still have a very vivid imagination.

• Being at home alone.

Here’s why: They’re still learning to trust the world and their capacity to cope with small periods of time on their own, without you. Staying at home alone might be exciting, scary or both – then there’s that imagination of theirs that might still ambush them at times.

• Something happening to themselves or the people (or pets) they care about.

Here’s why: They start to understand that death affects everyone at some point and that it’s permanent. They might start to worry about something happening to themselves or the people (or pets) they care about.

• Being rejected, not liked, or judged badly by their peers (buckle up – this one might stay a while).

Here’s why: This can show up at any age but it might ramp up or towards the end of these years. This is because they will start to have an increased dependence on their friendships as they gear up for adolescence. 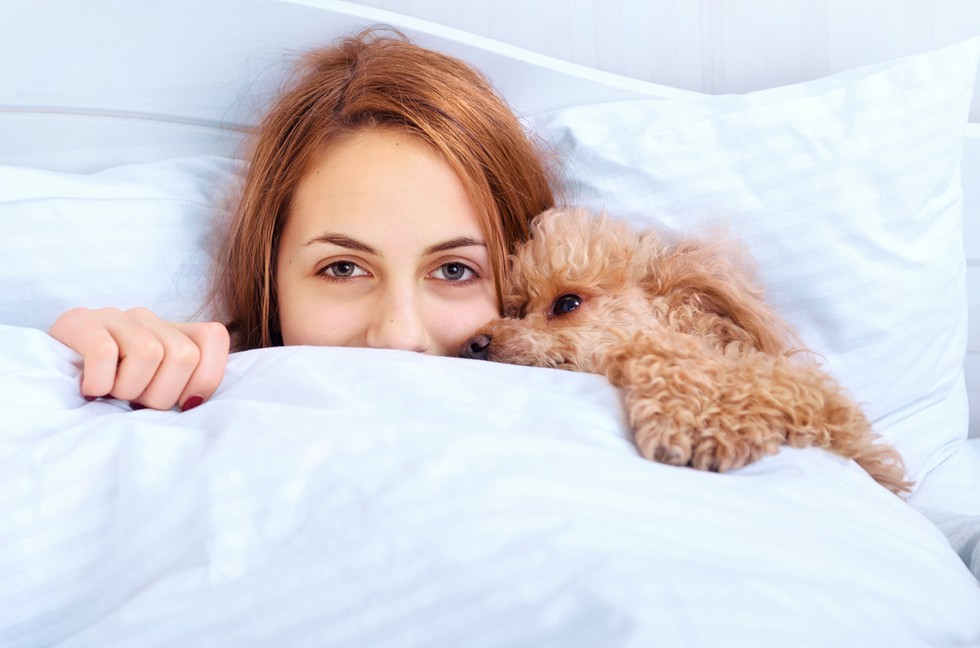 • What their peers are thinking of them.

Here’s why: One of the primary developmental goals of adolescence is figuring out how they are and where they fit into the world. As they do this, they will start to worry about what other people think.

They also have the job of moving towards independence from you. What their friends think will take on a new importance as they start to make the move away from family towards their peer one.

This is healthy and important and the way it’s meant to be. It’s all part of them growing from small, dependent humans into capable, independent, thriving bigger ones.

• Themselves or someone they care about getting hurt, becoming sick or dying.

Here’s why: They will be very aware that accidents happen, people get sick, and sometimes you just can’t see it coming. This fear will probably have more muscle if they hear of someone around them becoming sick or getting hurt.

Realizing that people can break isn’t all bad for them. During adolescence, they will be particularly prone to taking silly risks. It’s all part of them extending into the world and learning what they are capable of.

What’s important is keeping their fear at a level that it doesn’t get in the way of them being brave, learning new things, and finding safe ways to discover what they’re capable of.

• How they’re doing at school, exams, failure, getting into college or university, not being able to ‘make it’ after school.

Here’s why: They’re thinking about life after high school. They want to do well, live a good life, and chase the dreams they’ve been dreaming.

• Strangers getting into their room at night, war, terrorism, being kidnapped, natural disasters – and any other frightening thing they might hear about in the news.

Here’s why: They realize that bad things occur but don’t understand the likelihood and the rarity of such events. With their increasing time on social media, they will tend to hear about bad news more often and come to believe that the risk of it happening to them is greater than it actually is.

For Kids and adolescents.

• Give them plenty of information about what is happening around their environment.
• Meet them where they are.
• Play with what your kid fears, e.g. vacuum cleaner (unplugged)
• Validate what your child is feeling without overreacting to their fear
• Let them explore their fear safely.
• Understand the physical signs of fear such as shaky hands and thumb sucking.
• Be alive to what they are watching on TV or reading in books.
• Validate their fears and let them put words to their fears.
• Acknowledge any brave behavior they show.

It can always be unsettling when fears come home and throw themselves in your child’s way. Often, though, fears are a sign that your child is traveling along just as he or she should be.

The world can be a confusing place – even for adults. Of course, sometimes fear will lead to a healthy avoidance – snakes, spiders, crossing a busy road.
Sometimes, though, fear will be a burly imposter that pretends to be scarier than it is.

Fears are proof that your child is learning more about the world, sharpening their minds, expanding their sense of the world and what it means to them, and learning about their own capacity to cope.

As they experience more of the world, they will come to figure out for themselves that the things that seem scary aren’t so scary after all.
Special thanks to Karen from – Hey Sigmund